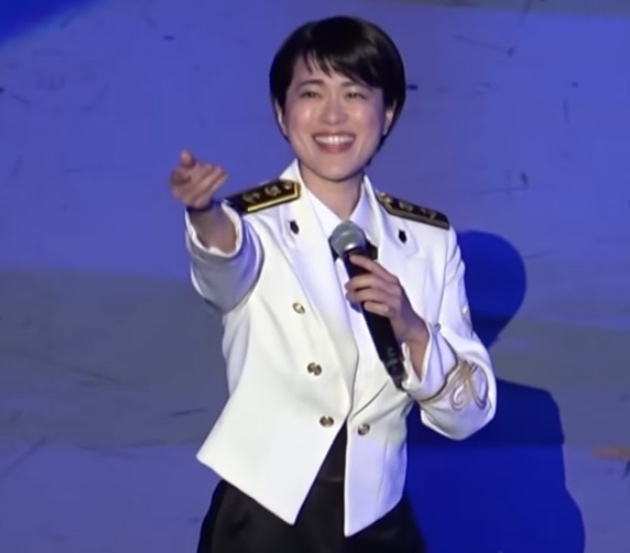 On 22nd Nov. 2018, I visited the "Budokan" to see the 3rd performance of Self-Defense Force Marching Festival 2018. This festival is one of the traditional events of the SDF with decades of history and is very popular. So tickets for this annual festival are hard to obtain, and it is said that the application magnification is about 7 times. I could say that I was very fortunate that I got a ticket this time. In this article, I will focus on several stages where Yukari Miyake appeared, out of the 2 hour long festival full of exellent performances. I attached links to the festival whole videos at the end of the article so please visit and enjoy it. Of course after reading this article!

At the opening, each diva of 3 Self Defense Force sang a play song "who will know" of the movie "Shin Godzilla". Michiko Matsunaga, center, is the singer in the Central Band of the Grround Self Defence Force (Army), Yukari Miyake, left side, the Tokyo Band (Navy), and Saki Morita, right side, the Central Air Band (Air Force). They beautifully sang this song full of deep sorrow. It was a short performance, but from the way of Yuka Miyake's motion, you can see a glimpse of her dance skill.

The Chapter 2 of the Festival "Challenge at Sea" concluded by a performance by the Tokyo Band. The performance started with a song by two Divas of MSDF, Yukari Miyake (left side at first) and Mariko Nakagawa (right side). They sang "Somewhere on this Planet" showing a smooth and elegant dance. The choreography, I guess, was Yukari Miyake's idea because she is very good not only at dancing but also at carrying out coreography. The two Divas have been acting years in each Band of MSDF but co-starred for the first time in this Festival. 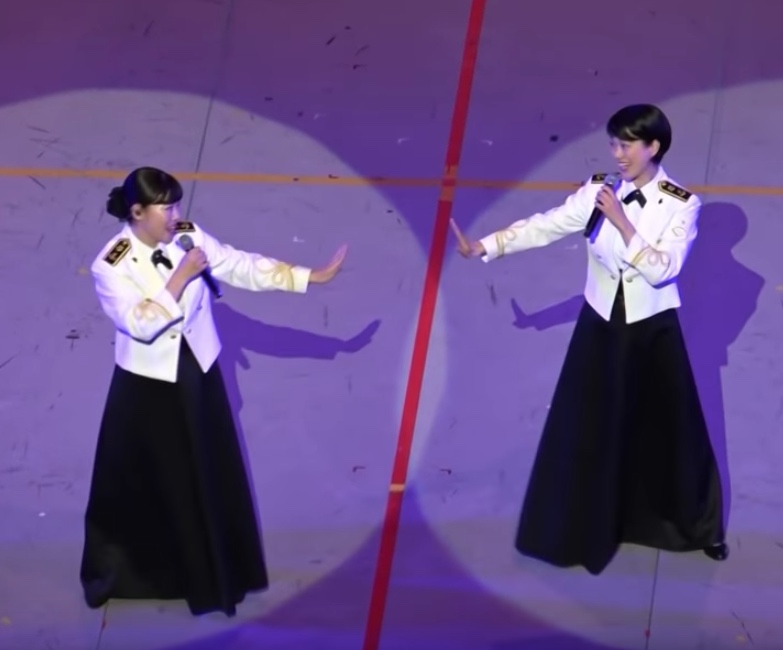 Their song and dance was followed by the Band's mind-inspiring performance ended with the march "Man of War", the symbol of the Tokyo Band. The band's members form a shape of an anchor and it rotates keeping brilliantly the shape.

Thre are so far 5 Divas in Japanese Military Service, 2 each in Army and Navy, 1 in Air Force. Some of them occasionally co-starred in the past, but never appeared all at the same time. In the Marching Fest 2018, they finally co-starred for the first time.
At the finale, they showed off amazing harmony and each of them expressed the joy of singing together with a shining look. I suppose that that was what Yukari Miyake, who with the longest career among them, have been longing for.

Two whole videos below. Visit and enjoy them!