Japan seems to be gaining popularity as a tourists' destination, and the number of people visiting Japan has increased greatly in recent years. But I'm afraid many of them seem to visit only well-known spots and miss opportunities to know deeper Japan. So I'd like to introduce you in a series some interesting spots I actually have seen by myself.

WHY STARTING WITH "MUTSU"?

The series starts with Mutsu city, Aomori prefecture, where located JMSDF Ominato Naval Base. Ominato Band is also in the base and holds many concerts in Tohoku Area throughout a year.

I once was assigned to this base for more than two years when I was an actual officer of JMSDF. I met and acquainted with many people in Mutsu and their heartfelt hospitarity really made my days wonderful while I had been up there.

That's why I start the series with this rural city.

Aomori prefecture is located in the northern end of Honshu, the main island of Japan (see the chart below). 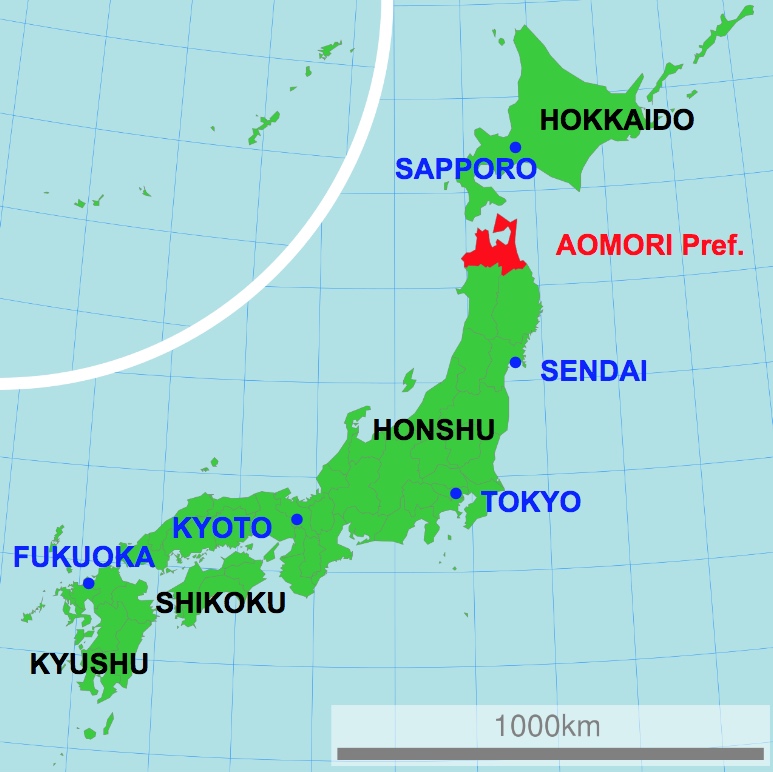 "Aomori" consits of two words "Ao" and "Mori". "Ao" means color blue, and "Mori" means forest. That is, Aomori means "Blue forest" in literaly translation. Feel queer? In Japanese the word "Ao" describes far broader range of color than blue. Green lights of traffic signals, for example, are called "Ao". In Waka, one of Japan's traditional literary fields, with a history of over 1,500 years, the word "Ao" has often been used to describe the greenery of deep forests. So the name Aomori may come from deep primitive forests preserved throughout the prefecture, I'm not sure however.

You can find it on a map that the landscape of Aomori prefecture is characterized with the terrain of the hatchet-shaped Shimokita peninsula. We call hatchet "masakari" in Japanese. So you would often hear this word when staying there. Products-sightseeing Center in Mutsh city, for instance, is called "Masakari Plaza".

Mutsu city is located in the peninsula and occupies a large area of it (see the chart below). 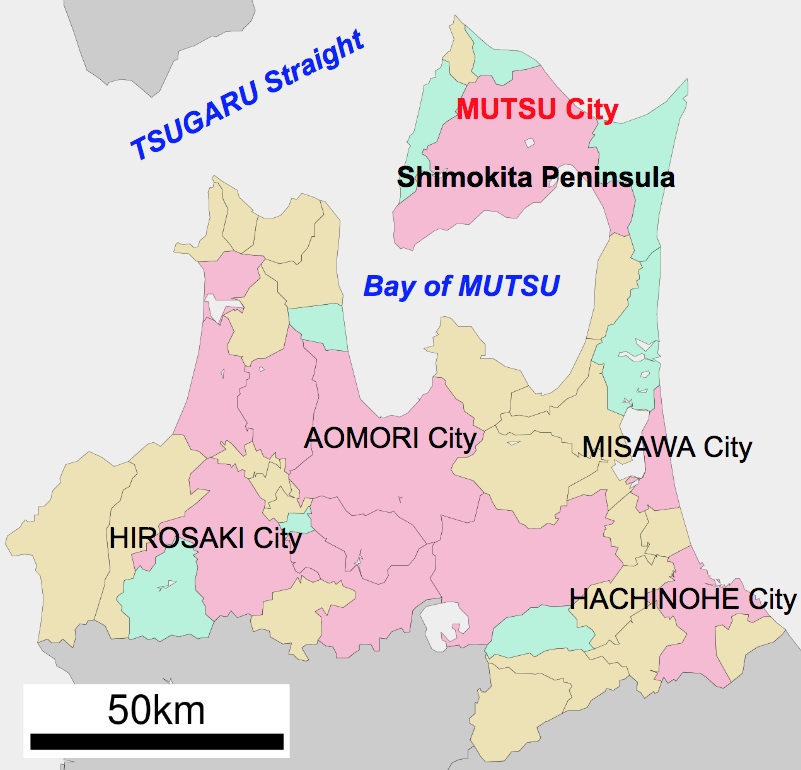 In 19th century, Japan experienced a really drastic change in the national system. Tokugawa military government which had been reigned Japan for around 300 years and had provided stable society throughout the nation suddenly gave up the power and returned it to the emperor. Though the background of this historical event was comblicated, it was sure that this decision kicked the nation into the civil war against the Tokugawa government's will.

Aizu-han (Fukushima pref. for now) was a major patriotic and pro-Tokugawa power which well fought against the new government Army. But eventually defeated to them and was forced to be moved and settled in Shimokita peninsula. Click and check the banner of Wikipedia below for details.

Shimokita peninsula at that time was cold and hopelessly barren area so frequent famine dereived them of many lives. I think those difficulties gave them the tenacious, mutually supportive nature which are seen now among citizens in Mutsu city.

When it comes to festival in Aomori, you may think of "Nebuta". With It's well known of its gorgeous and artistic "Dashi (floats)", so millions of people visit Aomori city every summer to see the parade of the floats goes on the main street. It's really fantastic and exciting to see in close to them.

But if you are not favor of being in jam and crowd, another chance to enjoy such a traditional festival in more settled condition can be found in Mutsu city. "TANABU FESTIVAL" is annually carried out 18-20 August to dedicate for the Tanabu Shrine located in the midst of the city. Many floats decorated with traditional designed colorful pictures which are lit from inside at night, are the highlights of the festival. The video below shows you how such floats are like. Traditional festival music performed by Japanese drums and fluts  can be heard, too.

SPIRITUAL SITE ONLY BE SEEN IN MUTSU

There is a very special spiritual site in a mountain in Mutsu city called "Osorezan" which is well-known among Japanese people. "Osore" means "Fear" or "Awes", and "zan" means "mountain". That is to say "Osorezan" is "Mountain of Fear and Awes".      There is a buddhist temple there and many trainee priests are living there. Necromancies called "Itako" are also there and tell you messages from the dead whom you know.

There is the lake Usoriyama there with the beautiful scenery giving you an impression as if it were an entrance to the Realm of the dead. Very impressive and fantastic it is.

The owner-hostess of this snack bar whom very well I lnow, is a licensed cook of Japanese Foods and at the same time a researcher and coordinator of chinese mecicinal foods who graduated from chinese medicinal food academy Tokyo branch of Beijing University. Furthermore, she also is an experienced nurse and holds a degree in Nursing Psychology! So her dishes get a reputation to be delicious and good for your health. And of course she has a lot of topics about medicine, cooking and liquor, so you can expect to hear interesting stories from her. She could advise you where to go, what to eat and so on, too! Reasonable charge makes you enjoy your evening time up there.
If you have a chance to visit Mutsu, why don't you drop in at this bar.