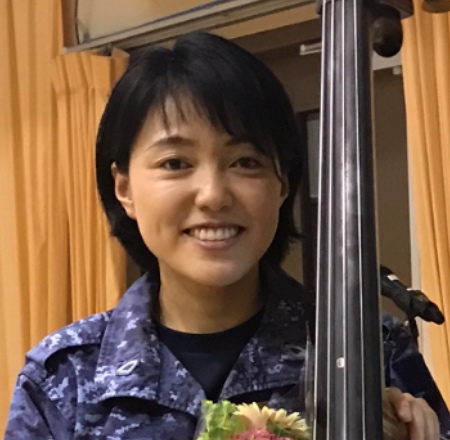 So far, I have written some 10 articles in English, focusing on Yukari Miyake and it seems that they gather access from abroad as I expected. From now on, I would like to introduce also other members of Tokyo Band occasionally. As you know, Tokyo Band is to leave Japan for a while to appear in "Royal Nova Scotia International Tattoo" held in Halifax, Canada, and I suppose that it may trigger many people around the world to have further interest in the Band members. I would be very happy if my articles help them know something about the wonderfull players in the Band. This is the first posting in such purpose.

At the top of this page is a picture of a smiling cute lady with a contrabass in Navy camouflage outfit. Akari Iwata is a petty officer 3rd-class (PO3) of JMSDF and one of the key members of the Tokyo Band. You might thought at a glance of the photo that she is a contrabass player in the Tokyo Band. It's of course not wrong, she actually plays it in the band. In video below you see her playing contrabass so neat and gracefully. This video is one of my most favorites. The performance played by trio ensemble, Akari Iwata (contrabass), Sawako Ohta (piano) and Yukari Miyake (vocal), unbeliebably moved me at first play. I personally call them "ensemble in miracle". Why don't you click and enjoy it!

Below is another video of her playing contrabass as duo ensemble "Miyabi" with Mika Araki (Harp), in pre-concert to the Christmas Concert of the Band, 2013. They beautifully play "Jesus, Joy of Man's Desiring" and "The First Nowell". Please enjoy their splendid performance!

Now you must have understood her to be a wonderful contrabass player.

Akari Iwata was born in Ichinomiya-city, Aichi prefecture and after graduating from the Aichi prefecrural university of arts she joined JMSDF. After well trained as a Navy person in the boot camp Yokosuka for months, she was assigned to the Tokyo Band.

The photo below shows Akari Iwata, in a serious expression, playing bass guitar cool on the stage of lunch time concert in Akasaka Tokyo last month. 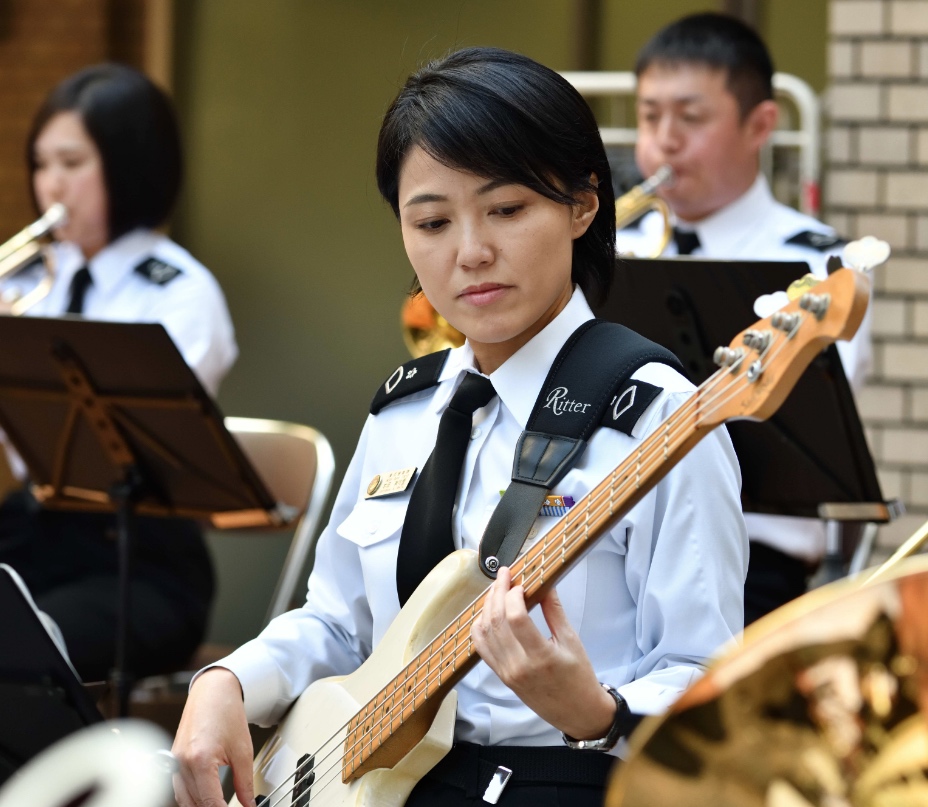 I want you to watch a video and feel how "cool" she is when playing electric bass guitar. The Tokyo Band appeared in the "Niconico super music festival 2018" held in Makuhari Messe in April last year.  In this concert "Night Sky Patrol of Tomorrow" got reputation with Naoki Fujinuma's super vocal performance. But at the same time, the super cool bass line distinguished the piece. Click the video below and listen to her playing. I'm sure no other word is needed without "cool!".

This cool bassist, once ending the stage, always shows the audience gentle and lovely smile as if she were a person other than the bass guitarist who has been playing sharp on the stage just several minutes before. The gap again also fascinates you!

Her smile is always cute and lovely, both in uniform and in her private clothes. 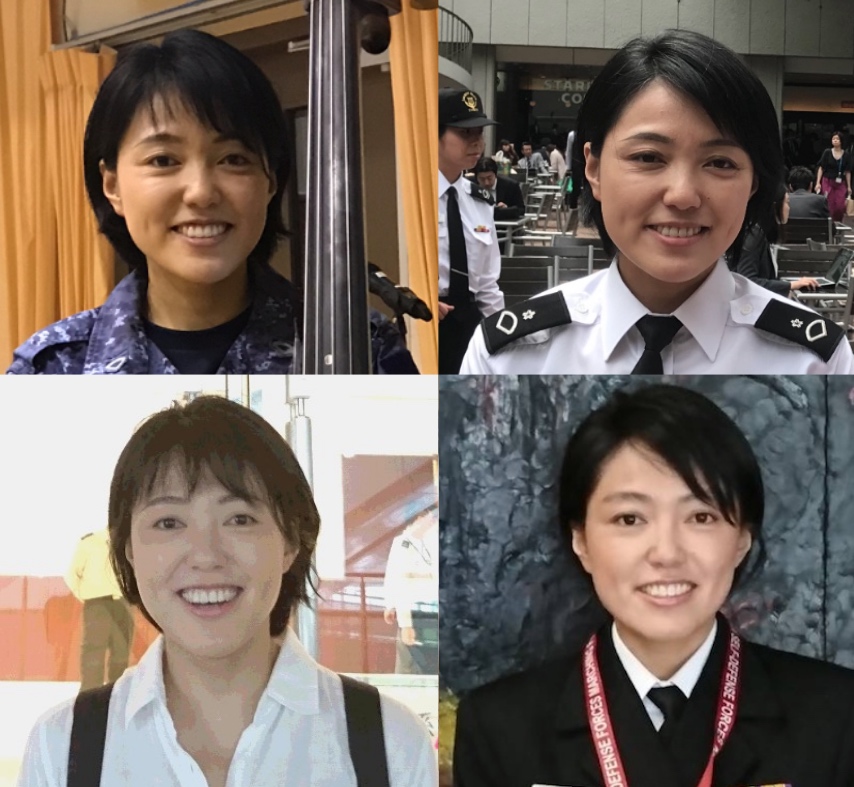 Very fortunately, I got have several chances so far to talk to her in some concert venues. Those opportunities have made me realize of her lovely personality. Though cool and elegant on stage, friendly, candid and unpretentious off stage. So she fascinates me not only by her musical performance and cute appearance, but also by such lovely personality. I love and admire her from the bottom of my heart, and hope that she would be loved by many around the world.