トップ > 三宅由佳莉さんの…シリーズ > All eyes on her awesome performances! 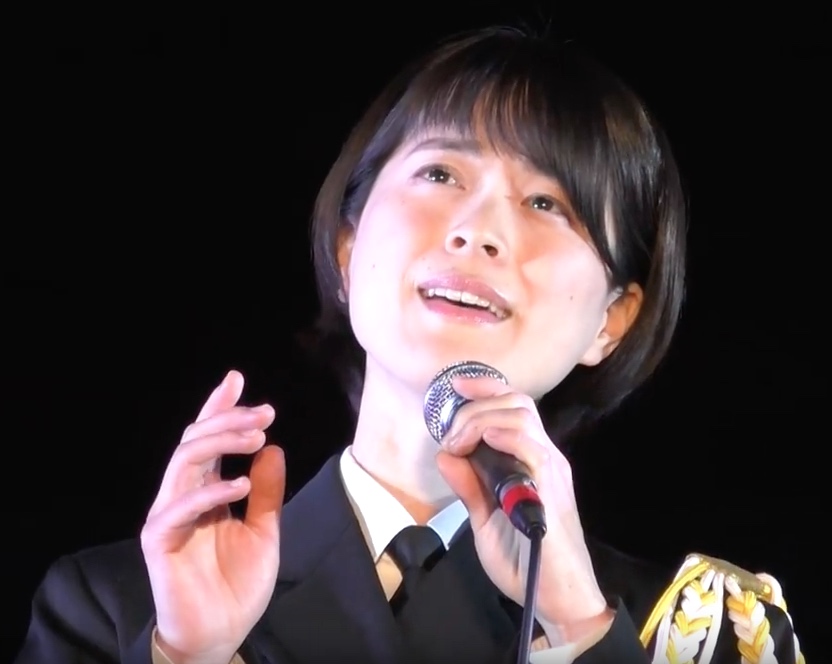 At the top of this page is a picture of a pretty singer dressed in military uniform. Have you ever seen her face or enjoyed her singing?

Yukari Miyake, is a singer in the Tokyo Band of the Japan Maritime Self Defense Force (so-called navy) .
On December 14, 1986, she was born in Kurashiki, Okayama prefecture, which is one of the cities full of historical emotion. 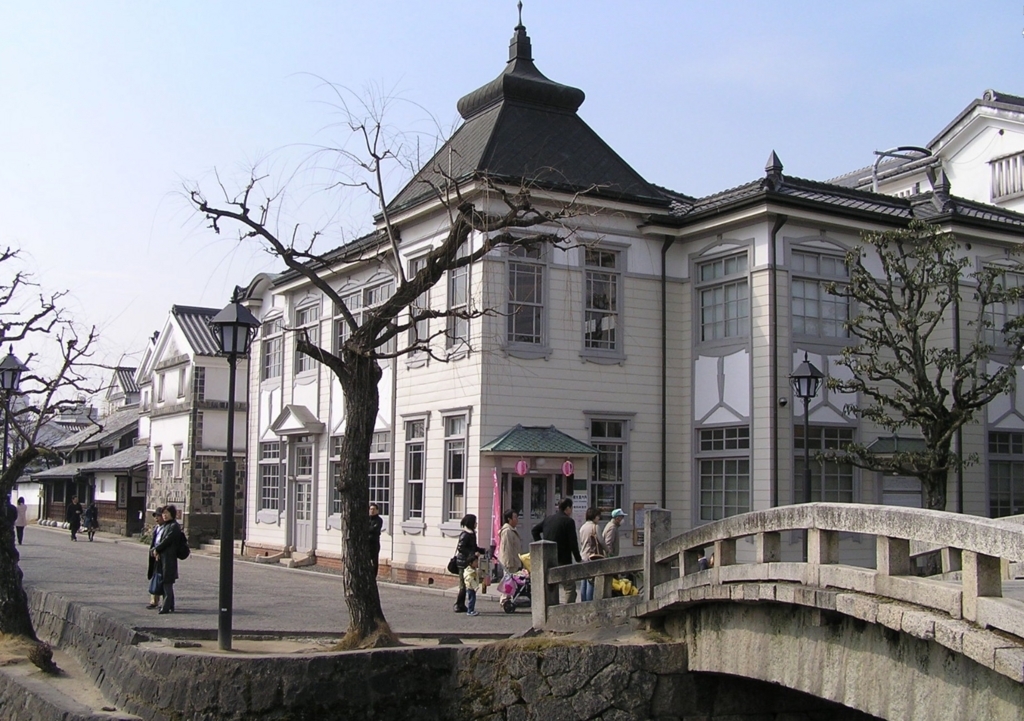 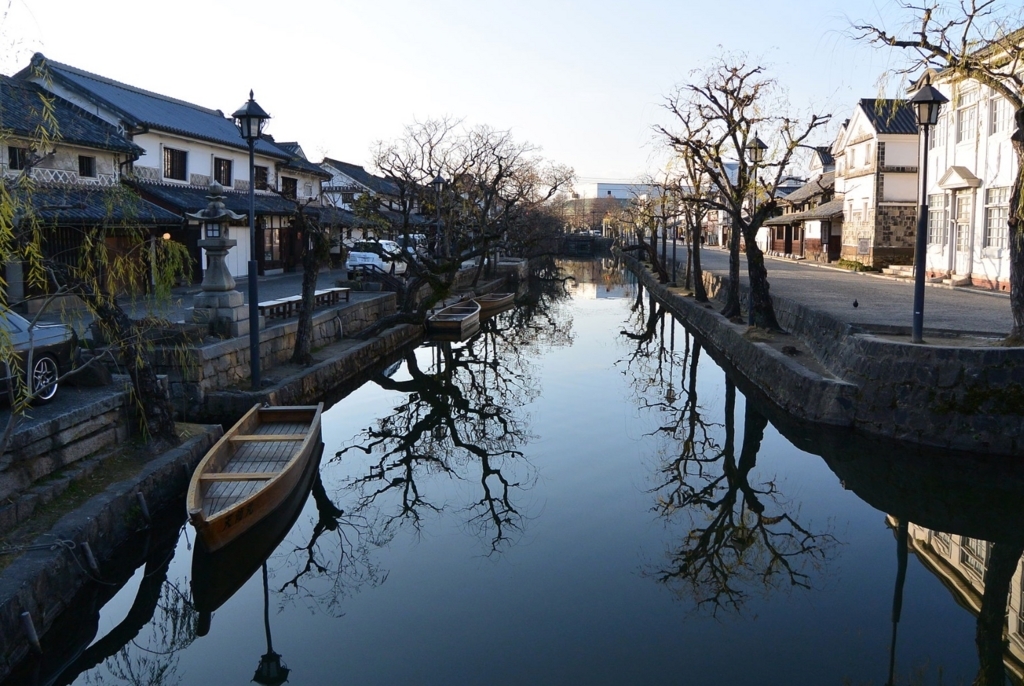 The dream from her girlhood was to set herself on stage as a musical actress. So she tried, broke through difficulties and joined the prestigious Kurashiki Children's Choir.  There  she polished her singing skills until she was an 11th grader.

Meanwhile, at high school, while studying at the music course, she belonged to the dance club of the high school and mastered dancing skills
After acquiring the skills of both singing and dancing, she entered the College of Arts, Nihon University in Tokyo and majored in vocal music.
From her lovely and neat appearance, who can imagine that she is a master of karate, a traditional Japanese martial arts? After entering the College, she joined the karate team and started doing practice in it, which was an inexperienced field to her. In the first tournament, she had lost the game in a flash. No one expected that she would win, because she was just a beginner and the opponent was upgraded. But to everyone’s surprise, after the game, she cried out with regret like a little girl. After that, she devoted herself to karate and paid every effort in mastering it, and, to my astonishment, by the time she graduated from the college, she had reached the level, skillful enough to win the National Championships. I can not find any word to describe what kind of person she is. The only thing I can do is to just admire her. 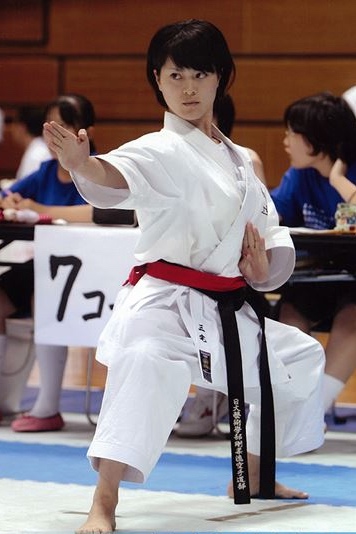 Well, lets go back to her dream. Though she sent her campus life dreaming to be a musical actress one day, she found herself facing the tough reality. She had to give up her dream for a while and decided to keep involved with musicals while working. She got an employment job offer from a famous department store.
Just around that time, one of the professors of vocal music told her that Maritime Self-Defense Force was recruiting a singer and advised her to take the exam. That’s right. Coincidentally, the MSDF had decided to adopt a singer for the first time in its history.

“At first, I was not interested in it at all” she says. “But she was the professor who had been taken care of me, so I told her “yes” and went reluctantly to the recruiting fair held by Tokyo Band of MSDF.”

However, the moment she listened to their performances at the Tokyo Band’s practicing hall, she felt some kind of excitement started to grow inside her. And the presentation they gave her finally caught her heart. "I wanna join the team!" She had decided to take the exam. Although there were many examinees for only one seat, cruising the difficulties, she passed brilliantly.

In April 2009, she enlisted, and after 5 months Boot Camp training in Yokosuka, she finally was assigned to the Tokyo Band. 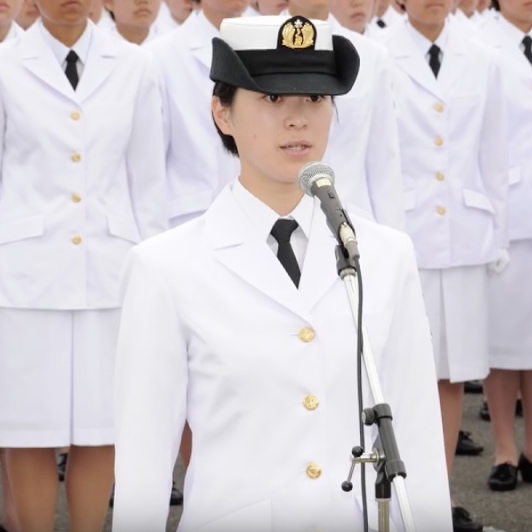 The Tokyo Band performs about 130 concerts annually in various sizes nationwide. She of course joins the Band's tours and sings songs for many audiences always longing for them to visit. Below is a picture of Yukari Miyake in the Christmas concert 2009. Click the banner under the picture and enjoy her performances in the concert held in the Triphony hall, Tokyo on 11 December, 2009. On 11th March 2011, a huge earthquake struck East Japan, causing massive and disastrous damage. Everyone in the Tokyo Band wished to proceed up to the disaster site immediately and help the victims and evacuees. While many Self Defense Forces units deployed there, the Tokyo Band was ordered to be on standby and prepare for the upcoming mission.  About a month later, the Tokyo Band finally got a mission and they started the consolation performances in the afflicted areas. Yukari Miyake was assigned to a team with 7 members. 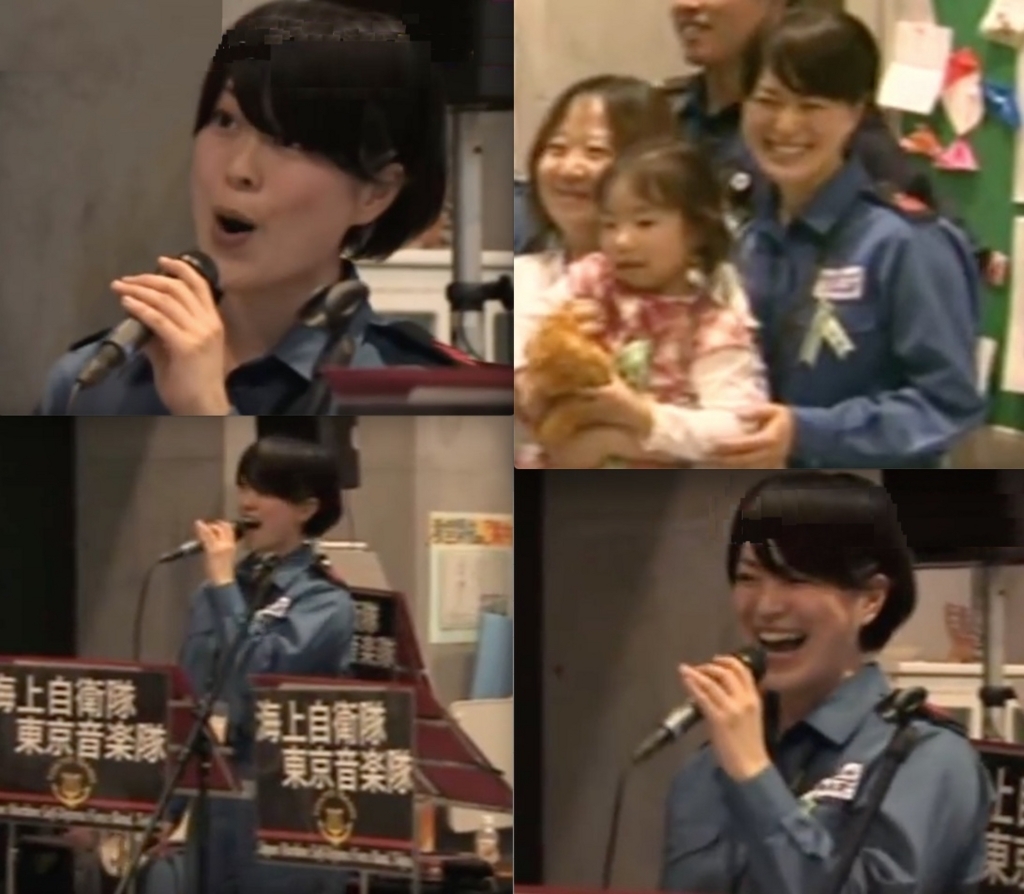 （ ↑ Yukari Miyake performing consolation at a shelter for the victims） 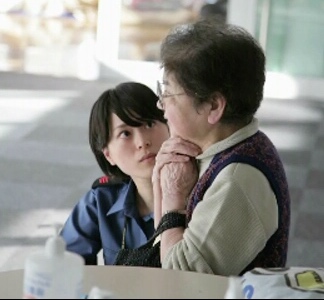 （ ↑ Yukari Miyake listening to the story of a victim with a serious face.）

While the Band members were engaged in consolation, commander (CDR) Kawabe, the Band Master of the Toko Band and at the same time a talented composer, was at work on a piece of song, which was to spread emotion later in Japan.

"Inori ~ a prayer" was written and composed for Yukari Miyake to consolate and encourage the victims and evacuees of the huge Quake and Tsunami.

The song became known little by little on the net, and eventually caused a sensation not only in Japan. With this song as a trigger, a number of news programs began to convey her. So she became gradually known to the publuc and that resulted in the increase of the number of applications to the concerts of the Tokyo Band.

Below is a video of Yukari Miyake singing "Think of me" in one of those concerts. The Tokyo Band performed "The Phantom of the Opera" in the main hall of the MINATOMIRAI, Yokohama 4 October, 2012.

Click the banner below and enjoy "The Phantom of the Opera" as a whole.

The Band's concerts attract and fascinate you, however the more she became famous, the harder it was to get concert tickets. They are still very hard to get even now.

That's why the performances of the Band in open spaces are really welcomed by the public. Below is the video of one of such performances held in Yokohama 13 October, 2012. "Time to say Good-bye" makes her a real Diva. Worth watcing, satisfaction guaranteed!

And finally, her singing appearances stuck in the eyes of a record company, and her CD debut was decided in a short time. 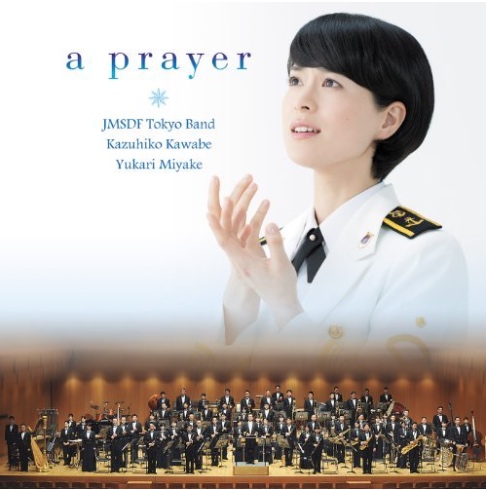 On 28th August 2013, her debut album "a prayer" was released, and it recorded an unusual sales which resulted that the Tokyo Band received the Japan Record Awards Planning Award in December of that year. At the awards ceremony, she sang "Tomorrow", one of the album tracks. ↓↓

CD debut and the Award earned her further popularity, and requests to appear on TV and radio rushed to her. Super busy years began for her and the Tokyo Band.

Her popularity and appeal invited unusual requests, too.

The National Stadium in Tokyo was decided to be rebuilt for the Tokyo Olympic Games in 2020. On 31 May, 2014, in "Sayonara National Stadium" ,the last ceremony held before it was disassembled, she sang national anthem solo.

However, no matter how busy she was, she never forgot her original mission to strengthen ties between the people and the MSDF. Please watch the video below. You can enjoy her amazing performance played in a regular concert. This video clearly explains you how hard she had practiced the performance to accomplish her original mission even in the super busy days.

On March 4, 2015, her second album "Hope ~ songs for tomorrow" was released. It contains the song she wrote for the first time, "Hope". 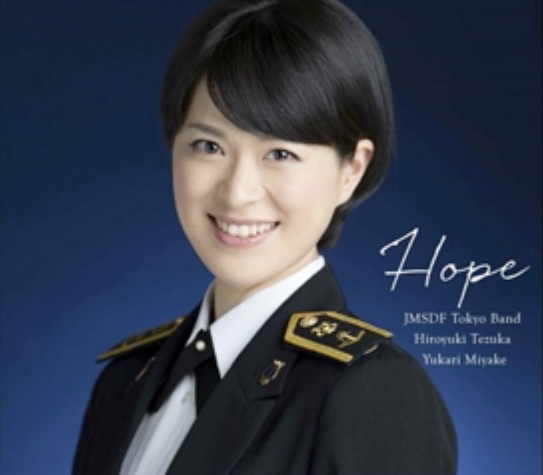 （Special live was performed in an elementary school in Tokyo on the day the album was released.）

On 16th April 2015, the Tokyo Band appeared on a music program of TV Tokyo, and Yukari Miyake sang a famous Japanese song "Tabidachi no hini ( On the day to take off )". It is usually sang in graduation ceremony in schools. Written and composed by teachers of a junior high school just for the school's graduating students, the master piece gradually was known to everyone in Japan.

Enjoy her heartfelt singing backed by the Band's neat performance!

On 1st January 2016, the Tokyo Band appeared on a new year's special program of Fuji TV, and Yukari Miyake sang the theme song "Let it go" of Disney anime "Frozen". The band and Miyake look so cool on the stage filled with deep blue lights, and their performance sounds fantastic.

Yukari Miyake has sang this song many times in various venues so far, but I think that singing at this stage is the best one. Why don't you enjoy it!

【New!!】Below is a slide show version prepared just in case.

On 17th MArch 2016, "Tokyo Boy's Collection", one of the biggest annual fashion events in Japan was carried out focused on military costume of Self Defense Forces. Many officers of mlitary services in various uniforms appeared and Yukari Miyake dressed in a summer uniform of the military band also walked up and down the runway and fascinated the audience. Why she in "Boy's" collection? Do'nt ask, just enjoy the video.

Since around 2017, the media has settled down, so it seems that she and Tokyo Band have become able to devote themselves firmly to their original duties.

The repertoire of her songs covers very wide range, so here I would like to introduce some of the videos of unusual performances.

Yukari Miyake covers a vocaloid number "Tell Your World" on the stage in the "niconico super music festival 2017". You'll be amazed by the breadth of her vocal range.

Yukari Miyake covers again a vocaloid number"Dance robot dance" on the stage "niconico 2018". It is a lot of fun that the audience as a whole gets excited with her performance.

Yukari Miyake (center) shows an exellent dance performance. They are covering a famous dance performance which had been played at the ending part of a jackpot TV drama, that hit a few years ago.  A good many people tried to perform it. However, I have never seen such a cool performance as this video.

how was it? I am glad that you are interested in her acting a very wide range of performances. I will continue to enhance the contents of this article from now on, so I'd like you to visit here from time to time.

By the way, last month (June 2018), she won second place in all the Self Defense Forces Karate-Do Championship Tournament. "Don't judge a book by its cover." Yes, she is not only a pretty singer, but also a real master of Karate, so you have to be careful enough when approaching her in an impolite way! 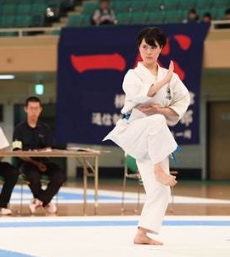